This year’s Full Circle will feature some of Matheny’s most talented individuals!  When you purchase tickets to this special event, you are supporting incredible artists who know no limits! 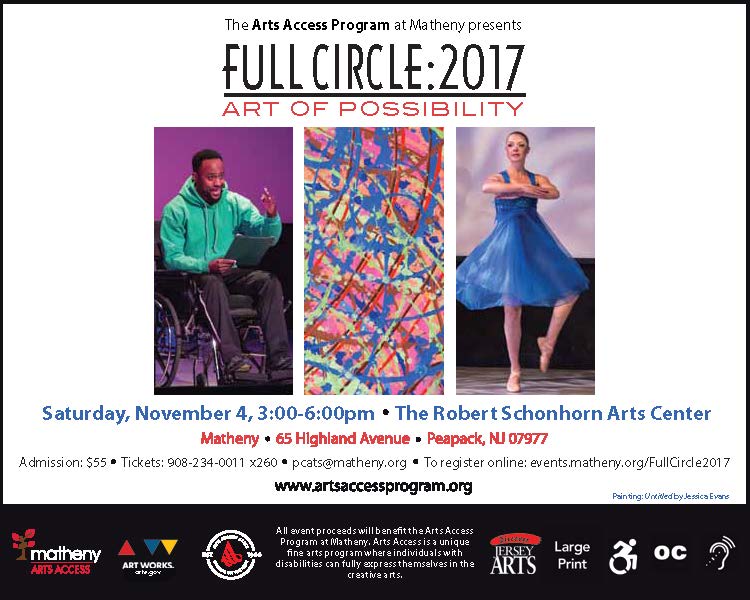 Therapy can be fun

Elizabeth Simpson of Gladstone tries out a wheelchair.

Children and adults from Peapack-Gladstone and surrounding communities recently experienced riding in wheelchairs, met some of the Matheny students and patients, and learned about Matheny’s Arts Access Program and how it works.

It was all part of an informal, activity-filled afternoon in the Robert Schonhorn Arts Center on Sunday, November 2, designed to introduce some of the entertaining aspects of the various therapies that play such a central role in Matheny’s mission of improving the quality of life for children and adults with disabilities.

It also was a time when community residents and Matheny staff members could get to know each other better in a very informal, open atmosphere. Those in attendance thought we should do it again, and we are already planning another event for the spring.

Debbie Infusino of Gladstone rides on the therapy horse.

Two artists in Matheny’s Arts Access Program have had visual art accepted for a juried exhibit currently on display at Art Enables’ annual “Outsider Art Inside the Beltway” event in Washington, DC. The pieces, selected from more than 250 submissions, are “TV” by James Lane and “Tide Crayon Blast” by Yasin Reddick. The exhibit opened October 11 and runs through November 11. This is the second year work by an Arts Access artist has been accepted.

Art Enables operates a studio and gallery in the nation’s capital for emerging artists with developmental disabilities, providing them the resources and support they need to become visual artists. Their artwork is exhibited and sold at the studio, at host venues and on the organization’s website, www.art-enables.org.

Arts Access provides individuals with disabilities the freedom to create in the visual, literary and performing arts.

Live performances of dance and drama were presented by Arts Access artists at the opening reception for “Reflections,” an exhibit of Arts Access visual art currently on display at the Grounds for Sculpture in the Trenton area. The reception was held on Saturday, September 20; the exhibit continues through November 2 in the Education Gallery.

Arts Access provides individuals with disabilities the freedom to create in the visual, literary and performing arts. In addition to the visual art on display, scarves, neckties and note cards with Arts Access designs are available for sale in the Sculpture Gift Shop.

The Grounds for Sculpture was founded in 1992 to promote an understanding of and appreciation for contemporary sculpture by maintaining a 42-acre sculpture park, organizing accessible exhibitions and interpreting these exhibitions through publications, lectures, workshops and other educational programs.

Ellen Kane, left, and Cheryl Chapin are among the Arts Access artists whose work is on display at the Grounds for Sculpture.

“Okaloni Palace” by Cheryl Chapin, part of the “Access-ABILITY” exhibit at the Morris Museum in Morristown, NJ.

Matheny’s Arts Access Program, which empowers individuals with disabilities to create art without boundaries, received a $34,267 grant from the New Jersey State Council on the Arts. The grant was among several awarded at the Arts Council’s annual meeting held July 29 in Trenton.

“Today’s actions,” said Elizabeth Mattson, NJSCA chair, “mean invaluable organizations, programs and individuals across New Jersey will have the means to do what they do best through the arts – shape communities and change lives.” Arts Access director Eileen Murray expressed her gratitude to the Arts Council “for their support and belief in the Arts Access Program. With their generosity, we continue to fulfill our mission of bringing artistic freedom and creative expression to people with disabilities.”

Arts Access was also one of 33 organizations receiving a Citation of Excellence, presented by the Arts Council to honor “New Jersey arts organizations, programs and projects that receive the highest possible assessment of their Council grant applications by esteemed, independent panels of their peers.”

“We couldn’t be happier to have Matheny open this exhibit,” said Geri Horn, Morris Museum trustee. “You have set the bar very high.”

The occasion was the opening reception for “Access-ABILITY,” a series of exhibitions the museum is presenting this year to showcase the expressive creativity of individuals with special needs. Seven artists from Matheny’s Arts Access Program were at the reception, and 30 pieces of visual art were on display. In addition, those in attendance were treated to readings of original work created by Arts Access writers. Arts Access provides individuals with disabilities the freedom to create in the visual, literary and performing arts.

Beginning Sunday, May 18, visual art by Arts Access artists will be on display at the Annual Collaborative Art Exhibition New Jersey Medical School — ARTS at Rutgers, The State University of New Jersey in Newark.  An opening reception will be held from 2-4 p.m. The exhibit will also include art from three other organizations utilizing the innovative Arts Access methodology: JSDD’s WAE Center in West Orange, NJ; Hattie Larlham Creative Arts Program in Mantua, Ohio; and The Arc Mercer, Inc. in Ewing, NJ.

Artists James Lane and Jess Evans. Behind them is an untitled painting by Cindy Shanks.

Eileen Murray remembers when she was first interviewed for a job as a painting facilitator in Matheny’s Arts Access Program. It was 2001, and she was so excited about the possibility of working in the program, she thought, “I hope they hire me, because I’m just going to show up for work.” Fortunately, Murray was hired, and, in 2011, was named director of the program. On March 27th, she received an award as Outstanding Professional in the Arts from Morris Arts at its annual Celebrate the Arts event.

Arts Access provides people with disabilities the freedom to create in the visual, literary and performing arts. Tom Werder, executive director of Morris Arts, introduced Murray, saying that she “is committed to enriching the lives of people with disabilities.” Murray, pointing out that all Arts Access artists have physical disabilities, added that, “the work they create is astounding. I am so lucky to work with these tremendously talented artists.”

Eileen Murray with Steve Proctor, Matheny president, left, and Daniel McLaughlin, chair of the Matheny Board of Trustees.

“Splitter Splatter” by Tammy Heppner, one of the paintings in this year’s visual arts exhibit.

In 1993, Matheny’s president Robert Schonhorn  and medical director Dr. Gabor Barabas launched a program called Arts Access. The idea was to see if people with disabilities, assisted by professional-artist facilitators, could create fine art. What started as a small pilot program has blossomed into a thriving arts program that encompasses painting, digital art, sculpture, dance, choreography, poetry, prose and drama.

The 20th anniversary of Arts Access, Full Circle 2013 Reflections, will be celebrated from 3-6 p.m., on Saturday, November 2, in the Robert Schonhorn Arts Center on the Matheny campus in Peapack, NJ. A visual arts exhibit will be held in the Arts Center gallery, followed by a multi-media fine arts stage presentation.

Matheny’s Arts Access Program has been chosen to receive a 2013 Excellence in the Arts Award from the Somerset County Cultural and Heritage Commission for “Arts in the Community.”

Arts Access was nominated for this award by Art Pride New Jersey, a coalition of arts organizations and individuals that advocate at local, state and national levels for funding, support and recognition of the arts as vital to New Jersey’s quality of life. In its nomination, Art Pride pointed out that Matheny is “a world-class facility that works to heal the body and nurture the spirit with the arts.” The National Endowment for the Arts has recognized the value of this program with a grant to celebrate the 20 years of excellence, and Arts Access has also received a ‘Citation of Excellence’ from the New Jersey State Council of the Arts.

“My Brain’s on Fire” dance by Jessica Evans performed at Full Circle 2011.

The  SCCHC award will be presented at a special ceremony on Thursday, October 24, at Twin Brooks Country Club in Watchung, NJ. Master of ceremonies for the event will be Nicholas Paleologos, executive director of the New Jersey State Council on the Arts.

Want to see paintings and digital art that “challenge the senses and push the boundaries of what you think of as art?” Check out the painting on this page by Arts Access artist Shaleena Tomassini at Matheny.  Madison-based artist Dan Fenelon describes the Arts Access artists’ work as “exciting” and Matheny President Steve Proctor says these artists “refuse to be defined by their disabilities.”

The artwork was created as part of the Arts Access Program, which provides professional “artist-facilitators” to help the disabled artists translate their visions into reality. The art will be on view at “Full Circle 2011: Dimensions,” an annual celebration of the program set for November 5 at the Robert Schonhorn Arts Center on the Matheny campus. The show will be curated by Fenelon, a painter, sculptor and muralist whose work includes a mural on the side of the Luna Stage Building in West Orange.  There will also be a stage presentation highlighting other art disciplines such as dance, drama, prose and poetry. For more information about Full Circle, call 908-234-0011, ext. 260, or download this flyer.